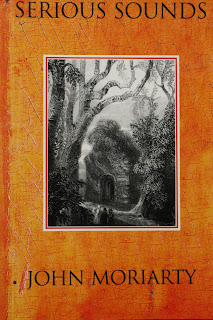 
I first came across John Moriarty when I heard him speak in an interview with Tommy Tiernan, which had been uploaded to YouTube. I was enthralled by his unique interpretation of existence and his lilting poetic speech.


His words resonated with me and I determined to find out more about this man.


I discovered he was a philosopher and a poet who had returned to Ireland after a career teaching in University in Canada, and had sought an isolated almost hermetic life for his remaining years. When he ran out of money, he would work as a grounds man in a nearby religious community. I was also saddened to realise that this extraordinary Irishman had never come to my attention before, and that he had died in 2007.


I made the decision to find one of his books and delve deeper into his works. There was very little of his writing available to buy but I managed to purchase a copy of ' Serious Sounds', first published in 2006. It was described as a telling of his childhood in rural Kerry and his upbringing within the Catholic faith.


The title 'Serious Sounds' related to the sound of water being poured into wine and the wafer thin bread being broken in the Eucharist. 'The most serious sounds in Christendom, I thought', stated Moriarty.


From the start of the book, which takes inspiration from Philip Larkin's poem 'Church Going', John analyses the meaning of the Christian journey and the ritual experience. He applies different interpretations to the well known words of church services, looking at Greek and Hebrew origins. He discusses aspects of morality and death. Though there is mention of people who had featured in his life, they are almost treated as an aside to his passionate discussion of religion.


I believe this book would be more understandable to someone immersed in religious dogma. To me, much of it was 'impenetrable', as Tommy Tiernan had described his experience of trying to read one of Moriarty's books. I had hoped for more description of Moriarty's childhood and I was disappointed in this. I had wanted to know more of his origins, and though I was aware that he was principally known for his philosophy, and should perhaps have anticipated his writing would be intellectually challenging, I didn't feel I knew or understood him by reading this. He remains for me an intriguing and beguiling complex character.


'You have to be plankton in an abyss of faith'. John Moriarty