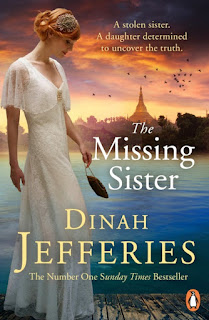 The Missing Sister by Dinah Jefferies


This is the story of Belle Hatton who travelled to Rangoon in the 1930s to work as a nightclub singer. She was born and lived the first years of her life in this city, and was drawn to go back to revisit a childhood she barely remembered. After her father’s death, she discovered papers relating to a missing child. To her horror and consternation, Belle realised that the child was her younger sister, who she had known nothing about. She determines to discover the truth.


The author’s descriptive narrative leads the reader through the colourful and exciting times of colonial Burma. The authenticity of the place and the complexity of society in those times before the Second World War are enthralling.   The heroine, a feisty young woman, pursues her investigation into the missing child, teaming up with an American journalist with whom she becomes romantically involved. The mystery leads her into dangerous situations and proceeds at a pace which captivates the reader up until the surprising and satisfying ending.


This book paints a vivid picture of a society that is long gone and weaves a romantic and thrilling element through it. The story is somewhat contrived but that does not take away from the readability and flow of the narrative. It is a book that provides a great escape from urban normality, researched in impeccable detail, grounding the reader into a world of glamour and intrigue.


This is the first book by Dinah Jeffries that I have read and I would certainly be interested in delving into her other novels. She will join the list of authors whose works I would be happy to take away on holiday. This is a book to relax with and enjoy and be transported back to a different lifestyle and era. I have no hesitation in recommending it.
⭐⭐⭐⭐
at October 13, 2019